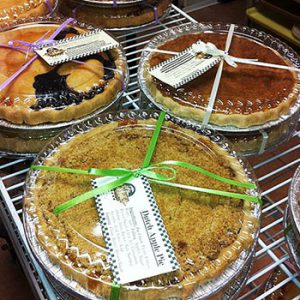 Dan’s Pies is located in North Webster, Indiana. It is owned and managed by Chef, Dan Bauer. Dan, served as the Head Chef and Assistant Manager for Quaker Haven Camp in nearby Syracuse, Indiana for a number years early in his career. People sometimes came to camp from miles around just to enjoy Dan’s wonderful pies served during Sunday mealtime whether they were camping or not. In the 1990’s Dan decided it was unfair to deny the rest of the world such tasty treats and thus the pie legend was born! Today, Chef Dan shares his passion for creating the perfect pie and bringing a smile to peoples’ faces through Dan’s Pies.

If you think one of Dan’s pies could bring a little joy to someone’s day, stop on by. Chef Dan loves to chat and he’s got the best pies around. At least that’s what his mother says!